Reasons Why I Don't Delete People From My FB

Social Media in general, and in this particular instance Facebook, is a great way to connect and communicate with family, friends, acquaintances and even strangers. Also, it is very important because now we have different outlets to express our opinions, views, desires, dreams, jokes etc etc etc.

Echoing Facebook's mission, yes, SM has made the world more open and connected.

The power of social media is simply undeniable.

As you might know by now, I love social media. I live on Facebook - which is my favorite one. I am an open book, and if you want or need to know anything about me and my life, you can check my Facebook and will easily find the answer.

I also use my SM to promote my writing - which I love, either from my LinkedIn and my blog Marlife. Therefore, yes, for me it is supremely important.

The reasons above are very valid, and that's why I am always on the look out to get new connections, new followers, new online friends. If I see an interesting profile, interesting for whatever reason, I would send a connection or friend request. I am doing this all the time. If my request is not accepted, I do not take it personally or get offended because I am not afraid of rejections of any type or form.

If I am the one who receives a new connection, follower or friend request, I greatly appreciate it, because it is another door open for me to share my life experiences and writing and things in general. Since I opened my Facebook, I have never ever deleted or blocked someone. The same with my other platforms Instagram, Twitter and Google+

And I will tell the reasons why - which is the core of my message in this post.

First of all, I personally find it extremely immature.

2) Because I value my connections, followers and friends for giving me the opportunity to share with them.
3) Because I am not a sensitive person therefore I am not easily offended by anything or anyone, at all.
4) Because I am not - and have never been - jealous of or threatened by the way people like to portray themselves on social media.
5) Because, as Psychology Today outlines "Unfriending is perhaps the ultimate passive aggressive forms of rejection that doesn't have a counterpart in the real world of relationships" and I am not interested in engaging in such behavior.
6) And Because I just simply love my online community.

Marlon/Marlife
Posted by Marlife at 06:05 No comments:

Based on a true story...

It happened in Barcelona.

Two very handsome, well-built, tall Eastern-European guys traveled to Barcelona, Spain for a week away in the sun. Their intention was to have a good time and spend time together as friends. They haven't seen each other in a long time. One lives in Dublin, the other one in Slovakia.

Once they landed, a sense of freedom & enjoyment invaded them. They just wanted to have a "relaxing time". What they didn't know was that there was a Brazilian girl who was gonna meet their path to give them a "blow job from hell".

One evening, after spending the whole day in the sun at the beach, they got their tanned bodies dressed and went out to for a few drinks. They arrived to the famous "Las Ramblas", found a nice spot surrounded by trees, exotic people and beautiful girls. The perfect setting for a great evening. 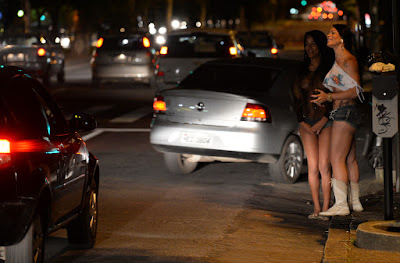 And the story on folds...

After a good few, they decided to go for a walk to see area. They were a bit tipsy at this stage. As they walk, they spotted a group of girls gathered at a corner, one of the girls winked at them and they walked towards her, she introduced her "Hi guys, my name is Andressa" - she immediately asked them "Would you like to meet my friends?". The boys said "Yes" so she brought them to a lane way where there were two other sexy girls.

One of the guys said he found the whole thing a bit suspicious, but at the same time he was enjoying the adventure of being seduced by the Brazilian girl who had curvaceous figure, brown skin color, long black hair and big lips. A true Pocahontas.

His friend got chatting to one of the other girls, and the 3rd girl was the look out.

They were offered oral sex, and they had no hesitation to say "Yes"

Moans and groans could be heard, but the look out girl made sure nobody would come and see.

They boys ejaculated in the girls mouth, thinking it was more than mission accomplished.

Job done - one of them said "Bloody hell, that was deadly"

They finished, said good bye and continued to stroll around the area. They stopped by a pub to have another to relax after having reached such climax. Asked the barman for two Tequilas, when they went to pay, there was no money in their pockets.

The Pocahontas, not only sucked them dry, but bled them dry too, around 350 between the two of them.