A little bit about Sammy

We got Sammy nearly eight years ago. Honestly, when John brought up the idea of getting a dog, I was very reluctant because it represents a responsibility I was not willing to take, but in the end, John convinced me and we got him.

When he first came to the house, he was an adorable little puppy, harmless with a face I just wanted to kiss. However, in the back of my mind, I was still thinking "this is going to be a responsibility which will at times be expensive.' But you know, I just went along with it.

Now writing this, in retrospect, back then I was not considering the emotional attachment that it would happen as it has. John had a dog before - Jake - but when I met him - Jake -  was not in the house anymore. So John already experienced what it is like to be a dog owner. I have never been emotionally attached to a dog, let alone to any animal at all.

Sammy has changed all this.

When we first got him, he was very placid, quiet, he wouldn't move. John now thinks he must've been drugged because, oh my god, 3 days later he became a lunatic. This little puppy, not adorable anymore, was wrecking the house, running around like a lunatic, going upstairs and taking control not only of the house space but also over us. He was like a Gremlin, and all we kept saying was 'WTF'.

He would go up to the top of the stairs which was the only place he'd be quiet. We would let him go up thinking that we were doing something 'right' as he would give us some sort of tranquility, but it turned out that in 'dog's psychological field' - which I must admit I didn't and still don't know anything, we were giving him power by allowing do so. When we were told this, I said 'that's it, there is no way an animal is going to dictate the way we are going to live in our house.'

A few days later, we sent him to a Dog's training program for a few days because he was uncontrollable. He would jump on people. He would not settle at all, well after all he was living a proper dog's life. Whatever that means! One time John brought him to the park, let him off the lead, he ran as quick as he could and demolished and ate all the food of a group of young girls who were having a picnic. The mother of one of the girls was going ballistic at John, like crazy. 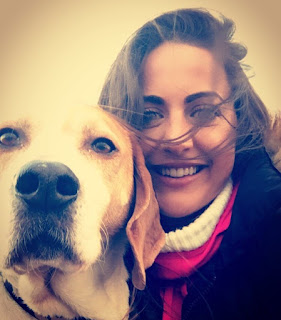 One of the things Sammy would do, in the middle of his craziness, was running away from the house every time he could, for whatever small reason we would have to open the door. Quicker than a blink of an eye, he would run out and it would be very hard to get him back into the house. One evening this happened, we opened the door for something and he ran out straight away and never came back that night.

John got in the car and went to look for him for hours. A friend joined the search for Sammy. I stayed in the house hoping that if he'd come back somebody would be there to greet him. A few hours later, John came back with his heart broken as he couldn't find him. As brave as I wanted to be, deep down in me I thought we have lost him and I was a little bit sad.

We went to bed hopeless thinking 'we have lost him'. I said to John 'Don't worry, don't be sad, we will get another dog' and John said 'Please don't give up so quickly.'

In the morning, John got up and went straight to our local kennel. Went in and asked if a dog with Sammy particular characteristics had been brought in. They said 'No' He came back out, heartbroken, and as he was about to enter the car, another car just pulled in with a little puppy showing the face in the window and it happened to be it was Sammy. Oh my god the excitement of it all. Sammy and John reunited again.

And that's how Helen came into our lives and mostly Sammy's. When he ran out from the house the night before, he was wandering the streets and happened to end up where Helen lives - which is not far from us - and Helen's mum was arriving home with a pizza, he followed her and started begging on their front door. They looked after him throughout the night. Needless to say, Helen is a dog lover, someone whose knowledge about dogs is so prolific that we should call her "The Irish Dog-whisperer". We are so grateful to her because to this date she is very much involved in his rearing. We would be lost without her, like he once was, if we didn't have Helen's help.

Sammy, the star of our Social Media

On social media he gets far more attention than John and I do. Every time we have posted something up about him and/or with him, the reaction is always good. Like for example:

I recently was trying to make a video to celebrate John with one of my favorite George Michael's song. Sammy got in the middle and 'ruined' the moment. Hilarious. I posted the video on Facebook & got over 2000 views. Video below.

Or when once John was trying to feed him. The scene was funny. I posted it on Facebook and he got over 800 views - which is great for a dog.

Or when he was going for a walk with Helen and he entered Helen's the car in true Sammy style. Posted the video on Facebook and got over 500 views.

I recently posted a Dogback time on Facebook and he gets over 100 reactions, plus 41 comments. 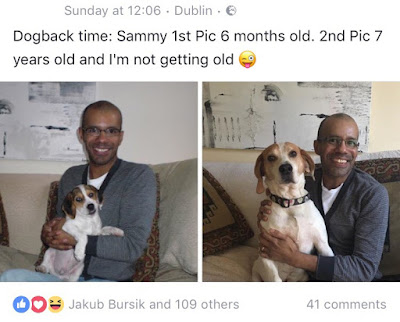 So as you can see, he is a little star. We love Sammy, we really do. As crazy as he can be sometimes, he keeps us entertained and busy and as we know we won't have children, we are happy to invest our energy in him.