It is by far one of the oldest and the most iconic establishment in Dublin’s gay scene. Its doors have been open to welcome not only the regular’s, but also people from all over the country and abroad. Its stage has been the cradle for so many acts and shows. From the weekly local drag acts to international ones. It has also been the platform for uncountable singing and dancing competitions & other events which are part of the premises catalogue of entertainment.

Its walls have plenty of stories to tell, and oh my god, if those walls could talk! Everyone you know might have a story to tell, that happened in there… So it is fair to say that there’s no place like The George and I’m pretty sure everyone has a special place in their hearts and super memories over the thirty years of its existence.

Located on South Great George’s Street, Dublin City Centre, it first opened its doors in 1985. In a  time very different than today’s, in a time when the thought of having a referendum to legalise gay marriage would have been just a very remote dream. Back then homosexuality was illegal and in retrospect, I personally think opening a gay bar was a brave move to make considering the circumstances.

The venue was a small place which is nowadays the area popularly known as ‘Jurassic Park’. Thirty years have gone by and yet the place is still up and running, even though it has faced some difficulties -  in the early days with regular police raids - which I have heard. It also managed to survive the recession.

Eight years later of its opening, homosexality was legalised & Irish attitude towards homosexuality started to gradually change. The same year, 1993/4, The George underwent its first expansion as a venue and these changes represented a promising future for the small Irish gay community. 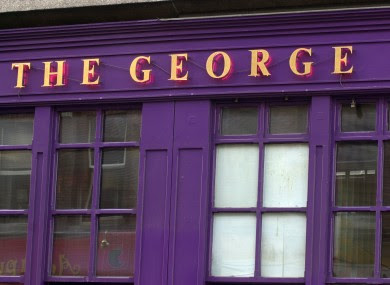 Already relatively well-established, they decided to introduce some entertainment to attract more people, and it was then when in 1997 the first ever Bingo show was created and is still a great attraction with the wonderful Shirley Temple Bar. We can only imagine the excitement due to the novelty of such show. Sunday bingo started on a stage made of a piece of wood held up by the stairs where Shirley first played with her balls.

In 1998, the second major renovation took place, and The George was extended to the size it is today. In 2000 the very first Space’N’Veda show was introduced and it still up and running with the very creative and amazing Veda who can sing and who has been re-inventing herself for the last two decades. I’d like to mention Veda is someone who can always count on my admiration. I think she is a great performer with a witty sense of humor. I just love her!

In 2009 another great performer became part of the catalogue, the fabulous Davina Devine. She is currently leaving her mark every Thursday with her Thirsty’s shows. She truly knows how to entertain her followers. I’d like to mention, Davina is a great make-up artist and I personally think sometimes she looks like Lady Ga-Ga.

It seems to be  there’s always a historical milestone in the gay community every time The George has to celebrate its important anniversaries. In its 25th the Civil Partnership was introduced and for its 30th the Same-sex Marriage Referendum took place. So the celebration is more meaningful, therefore, in those occasions, the Irish sky becomes a rainbow.

It is amazing to see what started as a small place on the corner of George’s street became a relevant establishment and a place of history for many gay guys.

Business, Sponsorship & another Wig and Make-up

Two years ago, when researching for this article, when I spoke to Manager Sophie McDonald, and asked the question why the place still open after thirty years? she emphatically outlined the loyalty of the customers, old and new ones. Even though, there are more new gay nights on the scene,  people still keep going back, showing their strong loyalty to the place. It is important to mention that the competition has prompted management to find new ways to offer customers a wide range of alternatives throughout the week. There is something different for every taste. So, yes, The George is very versatile.

Actively involved to support anything related to the gay community, The George is a proud sponsor of The Emerald Warriors, The Gay Theater Festival, Gay Pride, The Gay Men’s Health Project, just to name a few. It also helps fundraise for The Phoenix Tigers, The Dublin Front Runners, Wet and Wild Sports Group, among others.

Aware of needing a new wig and a retouching of make-up, recently the premises underwent a small revamp, they changed the floors, retouched the bar areas and gave the bathrooms and modern look - from customers requests. The front area was also retouched & it is proudly displaying the gay flag. The whole place is looking fabulous!

Moving along with the modern days, it has a nice, colorful website www.thegeorge.ie where we can find all the relevant information in relation to all the events happening throughout the week and month. It has a good social media presence to interact with its loyal and casual customers: Facebook Twitter  YouTube Google+ and Instagram @thegeorgedublin

Now considered Dublin’s Older Gay Bar, one of The George’s main aims is to provide a safe environment where we can socialize, have a dance, sing and why not? like me, find the man of your dreams. I met my partner of thirteen years in there. Which is the reason why The George will always have a remarkable place in my heart.

We might have different gay nights on every week, new places may be opening and closing down, however The George is and will always be the quintessential place of Dublin’s gay community, because it has been and still is every gay man introduction to the scene. It is like bread the butter. It is as essential in our lives as it is condoms and lube. The George is The George.

I first published this article on Gobsmackedmedia online magazine